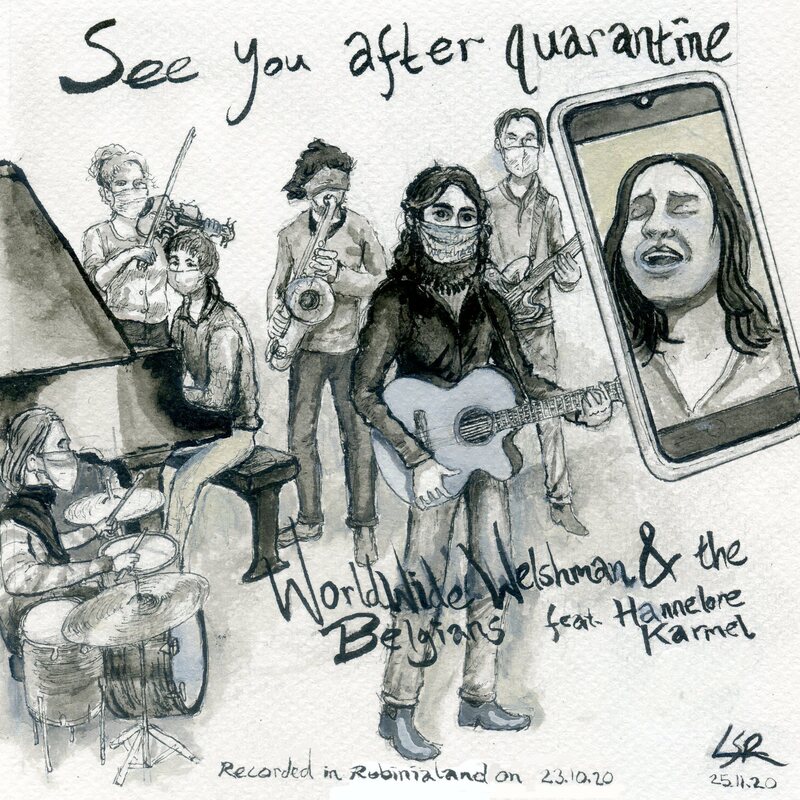 See you after quarantine….
by Liam Rickard & Hannelore Karmel, 2020
Friday the 23rd of October, Ghent: the night curfew was already in full swing and a second lockdown loomed on the horizon. I was due to take my train back to North Wales, and two weeks of self-isolation, in two days time.
But before I left, we transformed the Robinialand living room into a socially-distanced home studio and recorded this song:
Worldwide Welshman · See You After Quarantine
The co-writer, Hannelore Karmel Juurikas, was sad that she couldn't be there for the recording session, but she was able to join us virtually, in post-production, through the fibre-optic cables from Estonia (as you can see from the sketch).

The song was written on a Sunday in Brussels. It was the 15th March, 2020 and Belgium had just gone into lockdown. I was due to take a bus back to London that evening, and Hannelore would fly back to Estonia the following morning. But we didn't really want to leave, and we didn't know when we would all see each other again. She especially was making a fuss about this, and I, sat at the piano, started making up a mock-tragic song about it. Judging from the voice notes on my phone, this must have been at about 11.40am. A few hours later, we'd finished the song and filmed a little video.

I returned to Belgium in September to perform at BOM festival in Bij De Vieze Gasten, Ghent, where we gave this song its first (and so far, last) Belgian public appearance. I ended up staying in Ghent for a month with my bandmates in their shared house, the musician's paradise known as Robinialand, delaying the inevitable two weeks of mandatory self-isolation which I would undergo on my return to the UK. A very beautiful friend, Lin P, suggested I record See You After Quarantine which she remembered from our performance at the festival. I'm very glad she made that suggestion! This one goes out to her.

P.S. you can find it on all many major streaming platforms such as Spotify and Deezer
P.P.S. Music video coming soon!
Powered by